Have you been arrested in New Jersey and want to know about Pretrial Justice Reform?

Pretrial Release Affects Both Short-Term and Long-Term Outcomes for You!

The experience of Passaic County attorney David L. Pine is so important to achieve a pretrial release.   The impact of pretrial incarceration on a client is substantial. Pretrial detention has collateral consequences: It leads to people losing their jobs, not being able to care for their children, and losing contact with loved ones.  Attorney Pine will tenaciously advocate for his client's release.

Cash bail in the state of New Jersey was essentially eliminated when the New Jersey Criminal Justice Reform Act took effect on January 1, 2017.  Rather than require criminal defendants to post bail, New Jersey overhauled its criminal justice system and began to employ a risk-assessment tool to help judges make objective and informed decisions about pretrial release.

The new system starts with the assumption that innocent people should not be in jail. People can be held only if their release poses an unacceptable flight risk or poses a danger to their community.  Defendants who do not threaten public safety and are predicted to appear for scheduled court dates should not remain in jail simply because they cannot afford bail.

How Does the Pretrial System Work In New Jersey?

The underlying premise of this system is that all defendants, other than those charged with heinous crimes in which they face life imprisonment, are entitled to a presumption of release.

New Jersey Bail Reform Law depends on an objective assessment of the risks that a defendant might fail to appear, might commit new criminal activity, or might commit a violent crime if released.  The Administrative Director of the Courts has authorized an automated pretrial risk assessment process validated by extensive, state-of-the-art empirical research at the time of the arrest. The Live Scan fingerprint system is needed to initiate the automated pretrial risk assessment process approved by the AOC.

In cases where the defendant has been arrested for any indictable crime, an offense involving domestic violence where any of the grounds specified in N.J.S.A. 2C:25-21(a)(1) to (4) applies or any other offense for which fingerprinting is required by statute no complaint-summons shall be issued by a law enforcement officer, and no application for a complaint-warrant shall be submitted by a law enforcement officer to a judge or other judicial officer authorized to approve a complaint warrant unless the law enforcement agency making the arrest has initiated the automated pretrial risk-assessment process approved by the AOC.

The decision to issue a complaint-summons or apply for a complaint-warrant depends on the results of the automated pretrial risk assessment process, which is initiated after the defendant's fingerprints are taken at a police station with the Live Scan system.

The process of detention continues with the prosecutor's office reviewing the underlying charge at the time of the arrest. If a defendant poses a significant risk to public safety or flight, prosecutors can seek the defendant detained until trial. All other defendants are released pretrial on a range of conditions and are monitored by a newly created pretrial services unit.

To detain a defendant, the prosecutor must make a motion to the court that they are seeking detention.  This normally takes place within 24 hours of the arrest. If a motion is made by the prosecutor, then approximately three to six days after the arrest, a detention hearing would be scheduled before a Superior Court Judge. 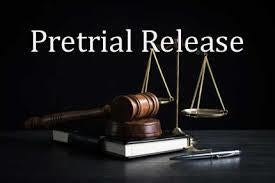