Frequently Asked Questions About Going to the Passaic County Courthouse

How do I find the Passaic County Criminal Courthouse? 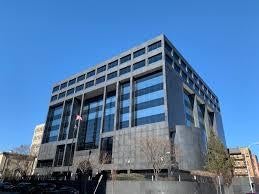 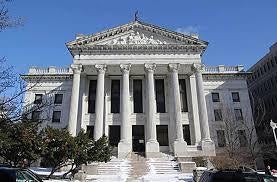 From New Jersey Turnpike:
Take the Turnpike to the northern terminus, then follow signs for I-80 West. Proceed as above.

From Garden State Parkway Northbound:
Take Exit 155P (exit from the left lane), which is a feeder route to I-80. Do not get on I-80. The exit ramp leads to Route 19 North.
Take Route 19 North to the exit for Downtown Paterson.
Follow signs for Downtown Paterson. Follow ramp onto Ward Street.
Follow Ward Street past three lights, then turn right 1 block past the third traffic light onto Hamilton Street.
Courthouse Complex is ½ block down Hamilton Street on the right.

From Paramus Area:
Take Route 4 West, which will pass through Paramus and Elmwood Park and cross the Passaic River into Paterson, where it become Broadway.
Continue on Broadway to Memorial Drive (Board of Health on left corner, Passaic Community College across from Board of Health).
Turn left onto Memorial Drive (sign reads College Boulevard for 1 block only).
From Memorial Drive, turn right onto Ward Street.
From Ward Street, turn left onto Hamilton Street. Courthouse Complex is on the left.

What is the Passaic County Superior Court?

The Criminal Part handles criminal cases for "crimes" or "indictable offenses" (what New Jersey terms offenses called felonies in other jurisdictions), which the New Jersey Constitution provides may only be brought by an indictment issued by a grand jury.  The Criminal Part also hears appeals from the New Jersey municipal courts for convictions for disorderly persons offenses and petty disorderly persons offenses (what New Jersey terms offenses called misdeameanors in other jurisdictions, which do not require a grand jury indictment), as well as traffic offenses and violations of municipal ordinances.

Where do I park at the Criminal Courthouse?

The city maintains several public parking lots along Ward Street a block north of the Courthouse.  Your best bet is to park at the lot located in the Center City Mall.  Availability of spaces is sometimes limited. There is some metered street parking in the area.

What time should I get there?

No.  If you decide to bring a child, there is no child care at the Passaic County Courthouse.

If you are scheduled for court, you must appear.  Failure to appear may result in a bench warrant for your arrest issued by the judge.

Will I be arrested at the Passaic County Courthouse?

If a bench warrant for your arrest has been issued, any law enforcement agency may arrest you.

Will I have to go to jail?

It depends on many factors.  An experienced criminal attorney such as David L. Pine will advise you accordingly.